Getting results – a Multidisciplinary Group in action 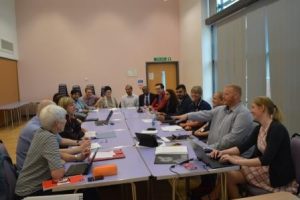 The patient and his family names have been changed to protect their identities but the story demonstrates just how effective an MDG (as pictured above) can be.

Laura begins: “Mr Arnold lives at his own home with his son, Rick, who has some mental health problems. Mr Arnold’s wife – and Rick’s mother – Sue had recently died after a long illness.

“Mr Arnold was not eating properly, attending to his personal hygiene and was unfortunately prone to frequent falls. On top of this, he also suffered from incontinence and open skin wounds.

“Added to this was the stress and agitation that Mr Arnold’s son, Rick, was undergoing,” adds Laura.

Whilst Mr Arnold was in contact with district nurses, he was also known to social services and was receiving visits from a social worker, who also had found some difficulty in dealing with the family.

It was at a nursing safety huddle meeting – a daily group meeting of district nurses – when Mr Arnold was first brought to Laura’s attention.

“His situation was explained,” says Laura, “with the district nurse who was dealing with his case saying that she was planning to go and dress Mr Arnold’s wounds, which had become infected.”

Laura – in her capacity as Multidisciplinary Group Nurse – was invited to attend a professionals meeting that Mr Arnold’s district nurse and social worker had arranged for his case to be discussed.

She continues: “It became apparent at this meeting that social work and the district nursing elements were not talking with each other and were working in isolation of each other.”

With the full consent of Mr Arnold, Laura forwarded his case to a Multidisciplinary Group meeting and that’s when things really started to come together…

“Here, a GP and consultant psychiatrist attended and information on Mr Arnold was freely shared, an overall picture of his circumstances was portrayed and plans were put in place to better aid his recovery.

“These plans included Mr Arnold’s son, Rick, working with social services to clean the house and clear a bedroom for his father.

“Rick also worked with the nurses who devised a plan of care to communicate expectations and create a routine for both Rick and his dad,” says Laura.

Importantly, a single point of contact – a care co-ordinator – was established which allowed better and straightforward communication between the family and the professionals supporting them.

Laura adds: “Things like decluttering the house helped prevent the potential for falls and the creation of a set routine for attending to things like self-hygiene helped improve the relationship between father and son and also established realistic expectations.

“Things improved enormously with areas like reduced risk of infection through improved hygiene and compliance with Nursing treatment and care.

“We went from monthly meetings to three monthly and then onto to six monthly meetings. I’m pleased to say that, since being brought to the attention of an MDG, Mr Arnold’s case has now been closed by social services.”