First, we asked Stephanie what the MDGs were and what they had set out to do.

Stephanie said: “MDGs are made up of a group of professionals who come together to discuss complex care and needs of patients/service users who potentially have a high-level of need or support required.

“The MDGs include GPs, advance nurse practitioners, practice nurses, practice staff, primary care-based staff and mental health professionals and, from social care, social workers and advanced social work practitioners. They all sit around the same table and discuss an individual patient or client aged 65 or older.

“Also, we have the health improvement team who, with other external services, help with engaging people to be motivated to look after themselves better. They try to motivate people to get out of the house and be more socially connected.”

So, how did the MDGs come about?

“In February 2013, Eccles and Swinton became pilot sites to test out some areas where MDGs might be developed,” says Stephanie.

“We were looking at the reasons why some older people in particular were frequently attending hospital and how we might try to intervene before people arrive at hospital.

Stephanie explains that one of the first challenges of the newly-formed workstream was the quality of the data available.

“In primary care, GPs can use an algorithm – a code or programme that makes a calculation – called a ‘Combined Predictive Model’ which they can then use to identify people who may be at risk of coming into hospital.

“However, we established that, the algorithm often didn’t include issues such as urinary tract infections and continence problems, and instead included out-patient appointments. Further to testing, the MDG realised that those patients, who were attending their appointments and having their needs addressed, were generally not at risk of coming into hospital.”

Stephanie describes the ‘level of intervention based on need’ model that was developed (see fig.1 below). 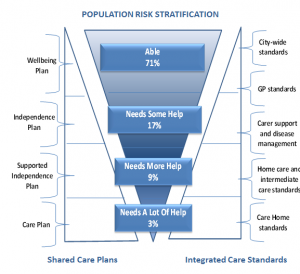 “We established four levels of need. First we have level one: someone who is classed as ‘able’. She or he is fit and well and able to look after themselves

“They could be providing care for a family member, or having some informal care provided to them but, in the main, they are fine and have no complex health or social care needs at the moment.

“At level two, we’ve got the ‘needs some help’ category. These are people who may require a little bit of clinical or social support.

“As part of level two, we’ve also identified people who live alone with health issues and anybody who has been recently bereaved as they may have a level of need that needs to be met following the death of a co-dependent.”

Stephanie continues: “At level three, it’s the ‘needs more help’ grouping. These are people who, on the whole, have an identified need that is being met by a district nurse and/or social care service – or both. This is in addition to the areas identified as part of Level 2.”

Finally, there’s the level four category which is classed as ‘needs a lot of help’.

Once any potential risks have been identified, Stephanie is keen to explain the individual nature the way in which the MDGs operate.

“The idea is that, before a person is discussed at an MDG, somebody – whichever professional has the most frequent contact with that person – contacts them and gets as much information from them as possible so that, in effect, we’re almost bringing the person to the table.”

Ultimately, it appears that the Shared Care Record (SCR) is something of ‘golden thread’ running through all of the MDGs.

“The SCR is vital for the sharing of information about people that are discussed at MDGs,” acknowledges Stephanie. “As part of that information-sharing, we’re also developing a patient-facing record so that, further to the MDG discussion, a printed record can be handed back to the individual discussed.”

“We always envisaged a very flexible model that could be taken anywhere,” says Stephanie.

“We have designated administrators that monitor and minute the meetings on laptops, the discussions and the updating of a patient’s SCR, which will eventually be shared with the patient. Importantly, information is also projected onto the wall in meetings so that all professionals in the room can see what is going on that record and verify the information is correct.”