Cosying up with Community Assets…

THE work of Community Assets in Salford is extremely varied and far reaching. It is about utilising the knowledge and life experiences of older people in Salford and making their lives better by listening and valuing their views, and ensuring this knowledge is used to influence the improvement of services and build stronger and more resilient communities.

The Community Assets group seeks to strengthen the support networks and groups already in place and also to help communities work together to find solutions to those problems that currently prevent older people remaining active and independent members of their community.

We spoke to Bernadette Elder, the Chief Executive Officer of Inspiring Communities Together – the Salford charity commissioned by Public Health to deliver the Community Assets workstream of the ICP for people aged 65 or older. To learn about their successes, click here. 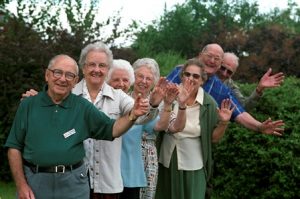 We asked Bernadette how she would explain Community Assets to an alien that had just landed from afar (which wasn’t completely inaccurate as our cub reporter was from Stockport):

“Community Assets is about building on the strengths of the individual,” said Bernadette. “It’s about looking at the skills and knowledge that you already have yourself and then looking at what facilities and provisions there are in the neighbourhood so that we can join the two up.

And how does that work, we ask?

“We set up a Community Assets working group which brings together all our partners who work with older people and have access to older people themselves – for example Age UK, Unique Improvements, Salford University, Salford Community Leisure, Salford City Council, the CCG, housing providers etc.

“We meet monthly at the Innovation Forum”, continues Bernadette. “It’s a very strong group with about 35 members who come together to develop the programme and then spread the messages within their own networks for older people so that they can engage in the programme.

“Older people are invited to help focus groups, consultations or invited to become what we call wellbeing champions to go out and have conversations with other older people.”

Programmes, partners and conversations. How does this translate into Community Assets we wondered?

Bernadette said: These all translate into activities. We call them tools. Tools that enable older people to live healthy, independent lives for as long as possible but actually also to help them to access support when they need it.

She gives the example of something called ‘Tech and Tea’.

“’Tech and Tea’ is a low-level digital skills programme,” says Bernadette. “We worked with our housing partners to test the idea of teaching older people about technology and the benefits it can provide.

“The test identified certain older people that might get engaged in doing some digital skills and so we ran a five-week programme with them, trying to learn from them what would and what wouldn’t work.”

So, taking the plusses and discounting the minuses from the tests carried out, the Community Assets team started off running a regular course in Charlestown.

Bernadette says: “Older people learned about using computers, laptops and tablets to find out about services, how to look after yourself and find out what’s going on in their local community. They also learnt about online shopping. Essentially, they discovered how learning about how technology can assist you and make your life easier.” 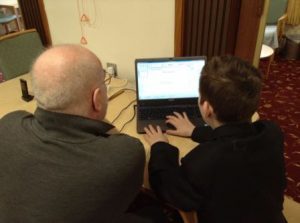 So these ‘Tech and Tea’ sessions were soon expanded and promoted wider?

“Yes,” says Bernadette, beaming. “We did the test, then scaled it up to a city-wide programme, taking place at community venues across the city and we now have what we call digital champions – older people who’ve taken part in ‘Tech and Tea’ and are now advocates for the cause.”

She adds: “We also have our volunteer wellbeing champions who attend and support our tutors to have the wellbeing conversation to complete the Wellbeing Plan. This is a tool that has been developed with local people based in the national 5 ways to wellbeing, which are evidence-based activities that are proven to help people to stay healthy, well and independent. This is the tool that we use for all of the Community Assets activity.”

Ah, we say, the ‘Wellbeing Plan’: we’ve it heard mentioned so many times. Tell us more!

“A Wellbeing Plan is conducted as a conversation and is your plan,” states Bernadette. “It belongs to you and completing it should make you think about what what’s important to you to keep health, well and independent by thinking about what you can do for yourself. You then take the plan away and put it into action.”

It becomes clear that the Wellbeing Plan plays an important role in all that Community Assets does.

“It is probably our biggest success,” says Bernadette. “It asks the older person to question ‘what am I going to do to maintain – or improve – my wellbeing?’.

“All we ask is that you – the older person – provide us with your name and contact details and that we contact you in three months’ time and see how you’ve got on and to see if you need any other support.”

Speaking with Bernadette, it becomes clear how wellbeing interacts with health. If you have good wellbeing, you’re likely to have good health and, conversely, if your wellbeing is poor then, as a consequence, your health is likely to suffer: if not now, then maybe down the line.

“We’ve done lots of work out in the community and lots of engaging with older people to get them thinking about having their own wellbeing conversations,” says Bernadette.

“There is an element where people have to take some responsibility for themselves.

“For example, recently, Andrea – our development worker – had a referral from the social work team. She went out and met a lady who has been poorly. She’d gone downhill a bit but was still able to get about a little but had chosen not to. Her family were very concerned about her as she was spending all her day ringing up her family because she felt that was the only communication she had.

“Andrea went down and they talked about some of the stuff going on in her neighbourhood that she wasn’t aware of and arranged to take her to an activity. She went along with Andrea to a session where a group of ladies get together and undertake some social activity.

“And as Andrea stepped back a bit to encourage the lady to get involved, the lady met someone she hadn’t seen for years.

“At first, Andrea had thought ‘Oh she won’t drink, she won’t eat or socialise’ – but there she was, having a cup of tea, a biscuit and really engaging. When she got home she rang her family and told them she’d had a great day out and she’s going again next week!

“Next week, Andrea has arranged to meet her at the bottom of the street so, again, we’re moving things slowly in the right direction. That’s just one of the many success stories we have.”

Future-wise, the Community Assets workstream appears to be moving full steam ahead.  Bernadette explains that their next ‘goal’ is getting Wellbeing Champions accessing a number of GP surgeries in Eccles and Irlam and working with to try and change the concept of what people often only recognise as a waiting room to a wellbeing provision.

“For example,” says Bernadette, “you might go in there [the GP surgery or practice] and get some information about health activities that are going on or you might have a conversation in there with a wellbeing champion about something that is going on in the neighbourhood.

“And then – on the other side – we have people with more experience who are there at GP surgeries who can have a one-to-one conversation with you if you need a little bit of help in goal-setting and helping achieve something you’ve set out to do.

“It sounds simple, but it’s about moving away from the idea that you always need to see a GP to actually improve your health and wellbeing,” adds Bernadette.

We will be looking at more case studies and more Community Asset success over the next few editions of the ICP Staff Bulletin.

In the meantime, to get involved in the work of the Community Assets team, keep your eyes peeled for posters in libraries, Gateways, housing providers and other community centres advertising the activities that are taking place.