SALFORD is celebrating after winning a national award for its continuing efforts to combat malnutrition amongst older people in the city. 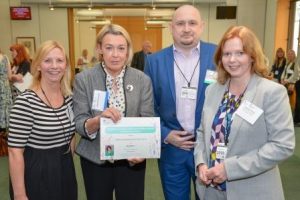 The Salford Malnutrition Task Force collected the 2016 excellence in public health and wellbeing award at the House of Commons last week.

The Task Force is made up of representatives of the Salford Together partnership of NHS Salford Clinical Commissioning Group, Salford City Council, Salford Royal, Greater Manchester West NHS Mental Health and from Age UK Salford, who provide further links to the community and voluntary sector.

Together this group has taken a ‘Food First’ approach to tackle malnutrition, developing many tools to aid and assist those who might have malnutrition or be in danger of becoming malnourished.

One of these tools was the nationally-recognised PaperWeight Armband, which is a low-cost, non-medical and non- intrusive tool that is slipped around a person’s non-dominant upper arm. If it slides up and down, it could indicate a sign of malnutrition, with specialists suggesting an upper arm measurement of less than 23.5cm, meaning likely your Body Mass Index (BMI) is less than 20 kg/m².

A BMI of less than 20 kg/m² is the cut-off point for being underweight and therefore at risk of being malnourished.

“The work is having a positive impact on the local NHS services which has led to a reduction in hospital admission for malnutrition.”

Dave Haynes, chief executive of Age UK Salford, collected the award from Jane Ellison MP – Minister for Public Health and whose portfolio the awards fall under.

Mr Haynes said: “I am delighted to accept this award on behalf of all of those who have made the Salford Malnutrition Task Force such a success.

“These awards aim to celebrate the achievement of those tackling health challenges in their communities.

“Whilst we continue to have success in our development of tools, such as the Paperweight Armband and also the Green Booklet, which we’ve modelled with local people into language that they understand to say ‘what can you do if you want to fortify a diet?’, we refuse to be complacent in our efforts to improve the health of our communities.”

Kirstine Farrer, head of innovation and research at Salford Clinical Commissioning Group and consultant dietician at Salford Royal, said: “We are thrilled to receive this accolade from Public Health England and wish to thank Mrs Barbara Keeley MP for nominating us.

“We remain passionate about working in partnership to address malnutrition across the city.

“Whilst developing the Salford Together PaperWeight Armband, I never thought for one moment it would receive such an overwhelmingly positive reception nationally.

“Having the opportunity to work with Age UK Salford and the integrated care programme in the city just demonstrates what can be achieved when you align health care and third sector.”

For more information about malnutrition, the Paperweight Armband and the Green Booklet, please log on to www.ageuksalford.org.uk or go to SalfordTogether.com

The excellence in public health and wellbeing award is now in its third year and are made following nominations from MPs, Directors of Public Health and others from across public health, local authorities, the NHS and the voluntary sector.
Pictured above right aere: from left to right, Jean Rollinson, director of service development, Age UK Salford, Barbara Keeley MP, Dave Haynes, chief executive of Age UK Salford, and Kirstine Farrer, head of innovation and research at Salford Clinical Commissioning Group and consultant dietician at Salford Royal.