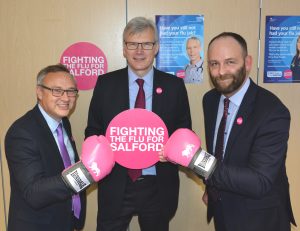 CITY leaders in Salford have come together to encourage at-risk residents to give flu a knockout blow by taking up the offer of a free flu jab.

Dr Tasker said: “The over 65s and other ‘at risk’ groups such as pregnant women, young children aged two to four, carers and those with long-term health conditions such as heart or respiratory disease are more susceptible to flu and its complications, so it is very important that they take advantage of the free flu jab on offer at their GP practice.

“Winter is on its way and, as temperatures drop, people prepare for it in different ways. We want to make sure that, for those who are vulnerable to flu, high on this list of things to do is getting their jab and protecting themselves and others they might come into contact with. The message is clear: don’t duck or dive – ‘grab the jab’.”

Echoing Dr Tasker’s comments, Salford City Mayor, Paul Dennett said: “Flu is not like a normal cold – it can be really unpleasant and its effects can be serious, especially for children, older people and anyone with a long-term illness. Getting a flu jab is the best way to protect ourselves.”

Sir David Dalton – who recently had his jab – added, saying: “By having the flu vaccine, people don’t just reduce the likelihood of experiencing a miserable few days, or worse, but they can also help reduce the number of GP consultations and hospital admissions due to influenza.”

Flu jabs are now available for Salford residents who need them at GP practices throughout the city.

Thousands of letters to people with existing health conditions, ranging from asthma to heart or chest problems, have been sent out inviting people for their annual flu vaccination.

Carers, pregnant women and children aged two to seven (who can be vaccinated by a painless nasal spray) are also offered free immunisation.

Salford’s flu vaccine campaign was given a recent boost when a short film featuring Salford youngsters reminding loved ones aged 65 or over to get their free flu jab, proved an internet hit.