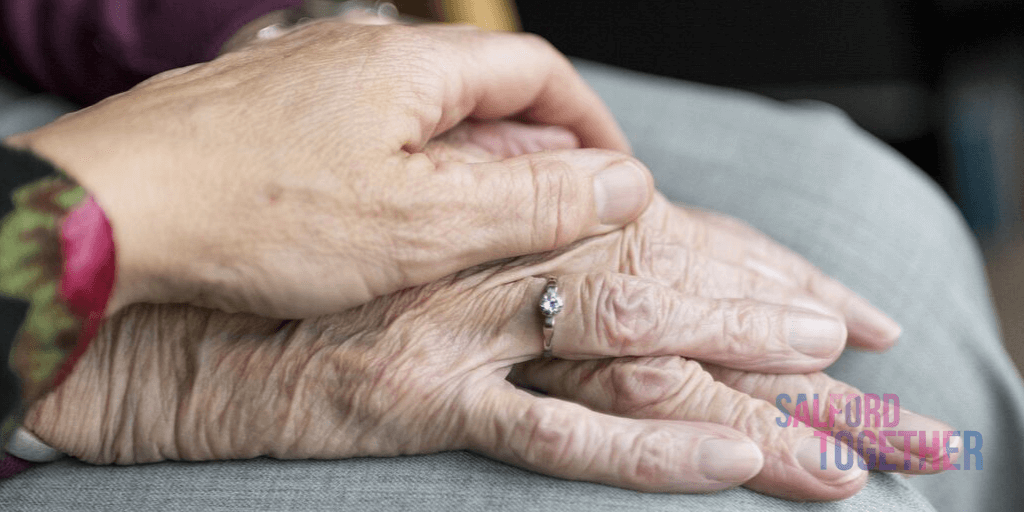 This is Roy and Irene’s story. They have been married for 20 years and live together with their two Chihuahuas in their home in Salford. Irene is Roy’s carer and was referred to the Enhanced Carer Support Service by a social worker from the Integrated Discharge Team while Roy was an inpatient at Salford Royal.

Roy had a stroke in 2016. Since then, due to further illness, Roy has lost his sight.

Irene felt that much of the time she was left to deal with things alone and had little idea about what kind of support was available or what they would be entitled to.

During Roy’s stay in hospital in December 2017, Irene was approached by ward staff who offered to ask someone to come and talk to her about support. Irene response was, “don’t bother”.  Her past experience had been that people listen and sympathise but then nothing really happens to help.

Irene later agreed to have a carer’s assessment and was introduced to Angela from the Enhanced Carer Support Service.

“From the minute she walked through the door I knew this time was going to be different”.

The Enhanced Carer Support Service is an innovative new project aimed at identifying and supporting unpaid carers at times of crisis.

The service offers an intensive six-week package and specifically works with carers who are supporting an older person with additional care needs, someone with a long term health problem or disability who wouldn’t be able to manage without their help and support.

Since its inception, the service has received over 200 referrals, of this 40 % are newly identified unpaid carers.

Irene felt that the enhanced carers support officer listened to her but did not patronise her or talk down to her as she had felt other workers had done in the past.

Angela was able to follow up on many issues that Irene had felt unable to such as supporting her to appeal previous benefit decisions and apply for other appropriate support.

“She would phone people in front of me, not away in an office somewhere. They would be on speaker phone and I could hear everything being said. If they said they would do something, she would say, is that ok with you.”

Irene now felt that she was being listened to and supported and involved in any decisions being made about Roy’s health or the family circumstances. Everything was checked back with her before anything was done. For the first time in a long time, Irene was able to relax.

“It felt like I had someone at my back”.

The enhanced carer support worker was able to liaise with other agencies to benefit Roy and Irene. This included support to understand their welfare rights, apply for TV licence rebate, have a stairlift fitted, have carer support twice weekly for bathing and respite support at a weekend to enable Irene to go out. The couple is also awaiting work to start on a new downstairs toilet & sink.

The couple says that they would have been lost without the enhanced carer support they received as Irene believes she was a braking point but felt no one was listening to her.

“People don’t listen to me but they do listen to people who have authority and know the right words to use”.