Citizen involvement and participation is very important to us, and as we look at bringing services closer together we will ensure that the community is placed at the forefront of all we do. We believe that as many people as possible in the city should have a say in the way services are designed and provided.

Throughout the three months, staff and partners reached out to Salford residents at community meetings, shopping centres and summer events to hear their views. A big part of the ‘conversation’ was emphasising the need for people to take more personal responsibility for their health and wellbeing, use services differently and promoting community resilience.

As a result of this, the citizen pledge concept was developed. People were encouraged to consider one step they could take to make a big difference to their own (or their dependents) health and social care outcomes. Leaders, front line staff and citizens of Salford all signed up to make a change and take responsibility for their own wellbeing.

Residents who completed the survey were encouraged to consider one step they could take to make a difference. The 4 pledge titles included in the conversation were:

Results from the Big Conversation

As part of the Big Conversation, 1,050 citizen pledges were made. Most of these were focused on continuing to make lifestyle changes and living healthier. One of the key findings was that people recognised that they need to take some responsibility for their own self-care to improve things within Salford. Two new pledge categories were also recognised; community life and self-improvement. From these categories it became clear that there is community spirit within Salford, and many people wanted to get involved with the community more. It also highlighted that taking responsibility for mental health is important for many. 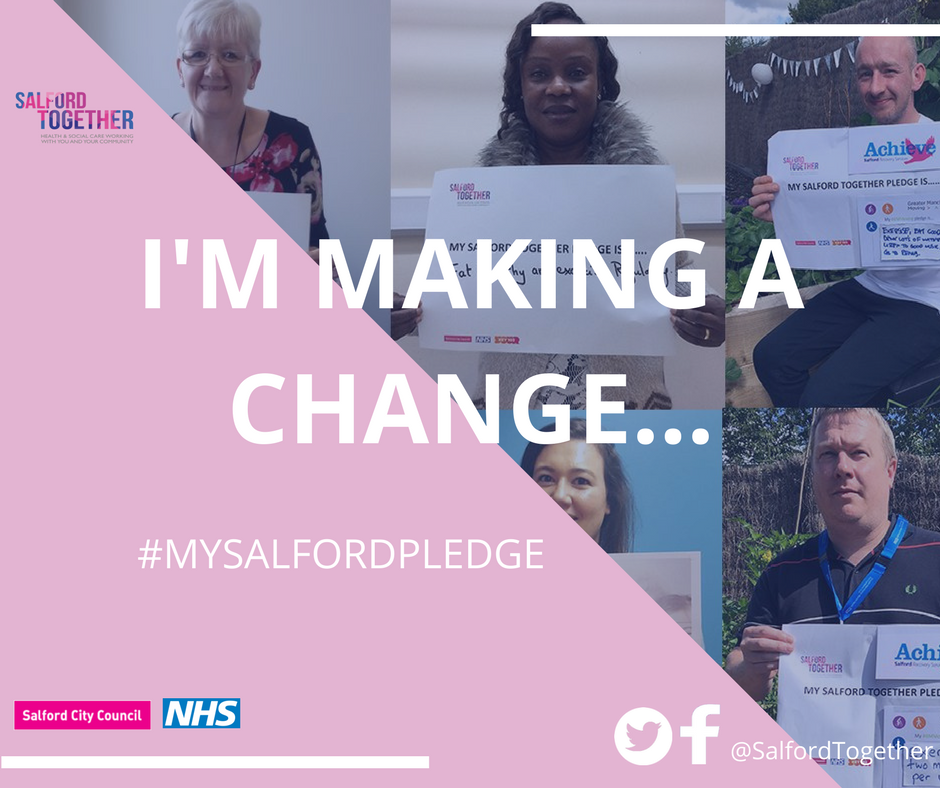 In January 2017, the Salford Together Big Event was held. The event was an opportunity to celebrate, reward and thank those who pledged, reveal the Big Conversation survey results and officially launch the #MySalfordPledge campaign.

The #MySalfordPledge campaign continued the work started by the Big Conversation and aimed to get our Salford citizens to carry on taking ownership of their own health and care. Residents were encouraged to continue pledging and bring their pledges to life on social media by sharing updates and showing their pledges in action.

People were encouraged to share pledges that would support wellbeing and make a positive impact on services, such as:

To build on the fantastic results and support even more residents to pledge, a fitness tracker giveaway was launched in May 2018. People were able to take part using the hashtag on social media, via the form on the website and also at events using pledge postcards. The campaign was a great success, reaching over 2,000 people on Facebook and 43,000 people on Twitter.

What will you pledge to improve your health and fitness? It’s not too late to enter our October draw to win a fitness tracker! All you need to do is tweet us your pledge #mysalfordpledge pic.twitter.com/RV9iNS5uVL

Here are just a few examples of pledges we received during the campaign: 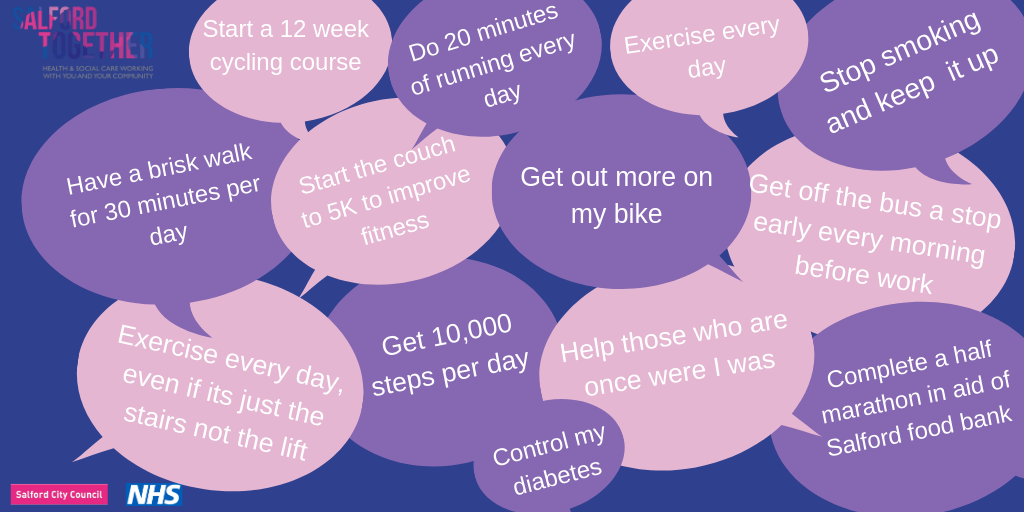 We’re really proud of the pledges that have been made as part of the campaign and together, we can continue to improve the way health and care services are provided within our community.