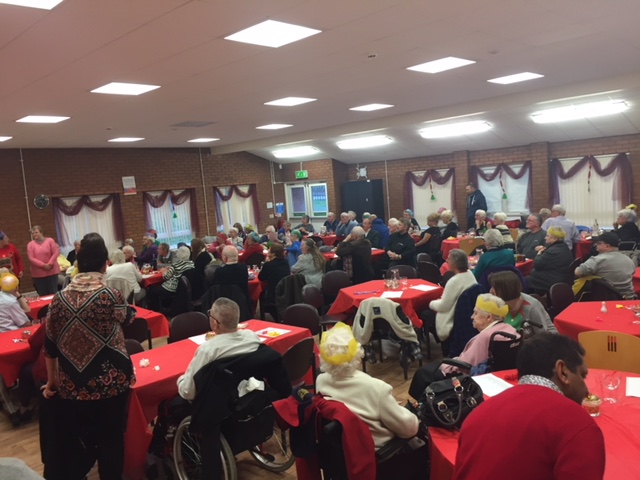 Local GP practices in Ordsall and Claremont worked in partnership to create a Christmas treat for socially isolated people.

The Ordsall & Claremont Reducing Social Isolation Christmas event took place at St Sebastian’s Community Centre, Douglas Green on Saturday December 2nd. The event was attended by over 100 people who were invited after being identified through their GP practice. Practice Managers had sent out invitations and then followed this up with telephone calls to encourage people, many of whom would not ordinarily leave their house, to come along and have some festive fun.

Partygoers enjoyed a Christmas dinner, songs from a local entertainer and a practice manager choir, and even a visit from Father Christmas himself. Following the festivities, a couple of local social groups, explained how they help local residents beat social isolation and encourage one another to be part of a community, however small. The party was not just a one-off event and more work is planned to support socially isolated people in the future.

The event was financed through an allocation of Innovation Fund monies received from Salford Primary Care Together (SPCT), an organisation which seeks to support local GP practices in offering improved ways of working to deliver better health and care outcomes for the residents of Salford.